Implanting replacement aortic valves via catheter is as good as, or better than, surgery for low-risk patients, new studies show.

It’s a function of age, mostly, when an aortic valve starts to fail. At the gateway where oxygenated blood leaves the heart, the leaflets of tissue that regulate flow start to act like rusty hinges, not opening fully and often not closing fully, either. With each beat in which circulation is reduced, more pressure is created inside the heart.

Medicine can’t treat this structural problem, which weakens people and can create other heart problems. Open surgical replacement of the valve has been the gold standard treatment since 1961.

But surgery’s days as routine directed therapy are numbered. Two new studies (1, 2) suggest that catheter-placed replacement valves threaded into the aorta as good as, or better than, similar valves placed by surgeons in low-risk patients. 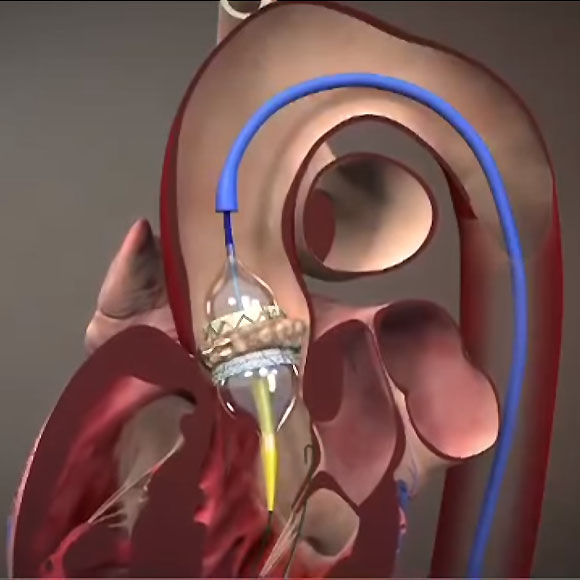 Illustration of the Edwards Lifesciences valve being implanted.

“The most recent data speaks to a much larger population of low-risk patients that currently are still FDA-indicated for surgical valve replacement,” said cardiologist James McCabe. “Given how positive the trial data are, everyone expects that the FDA indication will change in the near future, making a much bigger population eligible for TAVR,” he said – shorthand for  transcatheter aortic valve replacement.

McCabe led UW Medicine’s part in the international trial of Edwards’ Lifesciences TAVR. The tubular device is about an inch tall and has the circumference of a small coin. Crimped tightly, it is threaded through a blood vessel into the heart, then expanded, origami-like, within the original valve. Its biologic (cow) leaflets are held by a metal alloy lattice and take the place of the poorly functioning original leaflets. Medtronic makes a similar device.

When TAVR emerged as a less-invasive option 10 to 15 years ago, its benefits were not established, so it was deployed only in patients whose health was too tenuous for surgery.

“In a stepwise fashion, we moved down the risk spectrum,” McCabe said, gradually increasing the population to include patients with “high” and then “intermediate” risk with surgery. The new data indicates TAVR is appropriate for patients for whom surgery poses low risk.

The main advantage of TAVR to surgery is recuperation time. Relatively healthy individuals, after receiving TAVR, are back to their usual routines within a week, versus three months for open-heart surgery patients. In the recent trial, transcatheter valves also were statistically superior to surgically placed valves in measures of patients’ operative risk of death and stroke, hospital readmissions, and abnormal heart rhythms.

Low-risk patients not enrolled in the trials will have to wait until the FDA formally approves the device for them. But McCabe and colleagues can offer TAVR to those patients now because UW Medical Center participated in the clinical trial. It’s the only site in Washington, Wyoming, Idaho, Alaska and Montana with that access today.

There will continue to be patients for whom the surgical procedure continues to be appropriate, he added. He projects, though, that aging baby boomers will expand demand for the TAVR devices in the decades to come.