January 14, 2020
A donor kidney is prepared for transport to its recipient at UW Medical Center in Seattle. Brian Donohue / UW Medicine

Performance ranges from excellent to lackluster among the 58 nonprofits that manage donor-to-recipient organ transfers.

New federal guidelines were just announced to improve performance among the 58 nonprofits that recover and distribute donor organs for transplantation across the United States.  The proposal by the Centers for Medicare and Medicaid Services (CMS) would redraft performance standards to ensure that organ-procurement organizations (OPOs) meet expectations for organ recovery. Falling short could lead to an OPO’s closure.

The number of Americans awaiting transplant has long outpaced the number of available donor kidneys, hearts, livers, and lungs. Scrutiny has mounted to determine whether more donor organs could be recovered. A comprehensive study (PDF) published in 2017 reported that, in 2010, OPOs should've collected five times as many donor organs as they recovered. In short, potential exists to secure more viable donor organs. 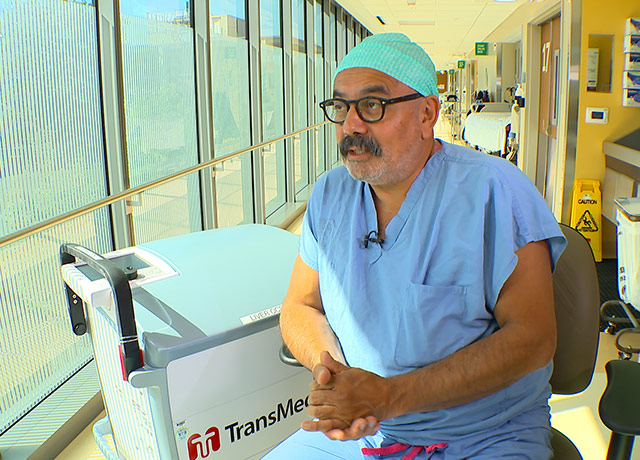 Dr. Jorge Reyes discusses the portable device beside him, which perfuses donor organs with blood and nutrients while in transit to the intended recipient. Photo by Randy Carnell / UW Medicine

Pressure has built since then to establish performance standards for OPOs, said Dr. Jorge Reyes, UW Medicine’s chief of transplantation.

Here's the administrative side of transplants: OPOs contract with individual hospitals to procure and provide decedents’ donor organs. Separately they contract with CMS for reimbursement of those services. Hospitals are obligated to refer potential donors with impending brain death so organs can be assessed for donation. After that assessment, the OPO staff work with transplant centers and make formal offers of organs to patients.

It is life-saving work, no doubt. But as with any other system with insufficient oversight, some OPOs are high achievers – like LifeCenter Northwest in Washington, Reyes said – and some have earned reputations for lackluster performance.

“Let’s say a hospital calls and they have a patient with impending brain death – but no one at the OPO answers the phone, or they don’t respond till the next day, when the opportunity for donation has passed,” Reyes said. “Or they (the OPO) don’t manage the donor’s clinical status well and organ donation ceases to be viable. Or they rule out a donor that should’ve received more consideration.”

State and regional populations and death rates inform estimates about how many potential donor organs should become eligible for transplant every year. The Washington Post reported its analysis showing that, in 2016, 27,000 U.S. patients met the criteria to donate organs, but fewer than half that number actually became donors.

“For example, you look at the performance of Philadelphia and the Delaware Valley OPOs, which are super-performers compared with OPOs serving New York, New Jersey, and Massachusetts. It’s night and day, but it shouldn’t be: It’s the same population, the same general demographic.”

Shortages experienced by some East Coast transplant centers have spurred wrongheaded efforts to redistribute organs nationally, Reyes said – so hospitals that depend on slacking OPOs could access donor organs from states with high-performing OPOs.  A more reasonable solution, he suggested, would be for local transplant centers to work with CMS to appropriately pressure OPOs to fulfill their contractual obligations.

Establishing standardized metrics should result in 6,000 more donor organs, CMS estimated. It also should shed light on the origins of local/regional organ-recovery shortfalls, and help to identify OPOs that are relatively more, or less, productive, Reyes said.